Dave Chappelle - In Your Dreams Tour 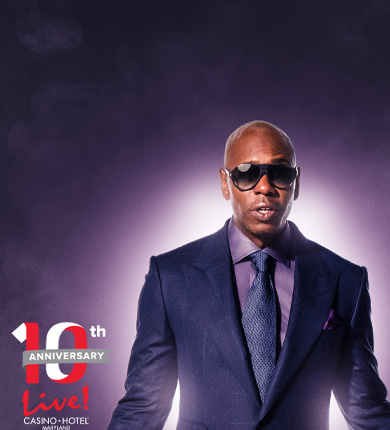 Location: The HALL at Live!®

Dave Chappelle is an American comedian, screenwriter, television and film producer, and actor. Recognized as one of the greatest comedians of all time, Chappelle was awarded the prestigious Mark Twain Prize for American Humor from the John F. Kennedy Center for the Performing Arts in 2019. Chappelle’s work in stand-up comedy, writing, producing, and acting has earned him more than 30 nominations and awards in television and film for projects that include his groundbreaking sketch comedy television series, Chappelle’s Show, guest appearances on Saturday Night Live, and his comedy specials, which have collectively earned five Emmy Awards. In audio content, Chappelle has won the Grammy Award for Best Comedy Album three years in a row, 2018 through 2020. In 2017, Netflix cited Dave Chappelle: Collection 1 as the most-viewed comedy special ever on their network.

Please note: this is a phone-free show. No photos, video or audio recording devices allowed. Upon arrival at The Hall, all phones and other photo or video-capturing devices will be secured in a Yondr pouch that will be unlocked at the end of the show. You keep your pouch-secured phone with you during the show and, if needed, can unlock your phone at any time in a designated Yondr Phone Zone located outside the venue.